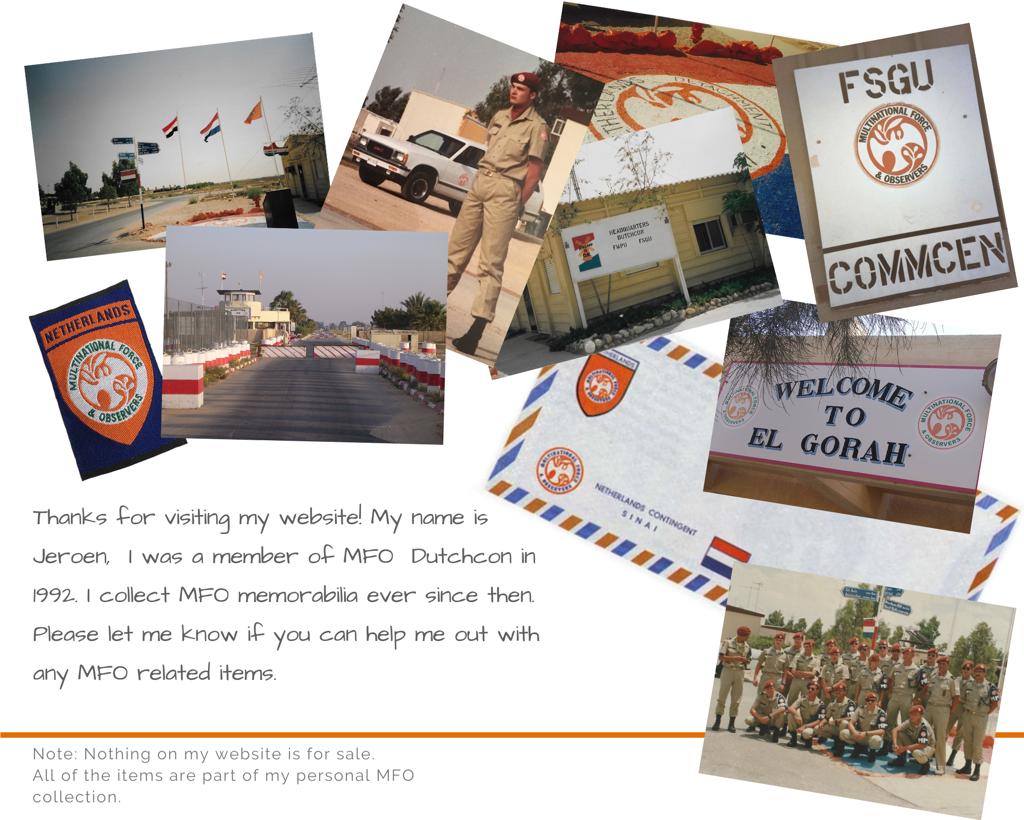 On the 22nd of November 1981, the Dutch government provided a Marechaussee detachement of 21 personnel (part of the Military Police Unit, FMPU), a signal company of 84 personnel (the Signal Unit, FSGU) and several staff officers.

The signal company’s job was to maintain MFO’s internal and external communications. There was a signal detachment in both the north camp (El Gorah, also MFO headquarters) and the south camp (Sharm el Sheikh). The zone in which MFO's troops were active was divided into 6 sectors, each with a number of checkpoints, observation posts and a sector control centre (SCC). The SCCs were incorporated in the company staff of one of the MFO battalions and contained the Dutch signals personnel. Each SCC was provided with 3 ‘signalmen’, who rotated regularly with the stay-behinds in the north and south camp. These stay-behinds in turn manned the communications centres of the infantry battalions in the north and south camp and of the headquarters.

The size of the signal company was reduced drastically at the beginning of the 1990s because of cutbacks, more communication lines and more sophisticated communications equipment. First of all, the signal centres in the north and south camp and the permanent HQ staff had to give up 10 functions. Between 10 March and 4 July 1990, the infantry battalions took over the communications tasks from the SCCs. The number of Dutch signals personnel decreased accordingly to 50. More cuts were made in the signal company at the beginning of October 1993. This time, 15 soldiers were sent home early and 6 more would not be replaced after their rotation.

The FMPU was responsible for the police tasks at the various MFO locations and wherever personnel were operating in the field. An important secondary task was to maintain contacts with local police officials. The FMPU was under the command of a Dutch force military police adviser, who also held the post of provost marshal. He was responsible for the daily running of the FMPU and also advised the force commander (from 11 April 1991 to 21 April 1994 this was Dutch Lieutenant General J.W.C. van Ginkel) on military police matters. The expansion of the FMPU’s tasks and border control at Rafah and Taba meant that the size of the detachment increased to 36 personnel. The Netherlands terminated its participation in MFO in the first half of 1995.

In January 2013, the MFO was pleased to welcome the Netherlands back into the MFO as a troop-contributing state. A specialized staff contribution arrived in the Sinai, consisting of three officers and one non-commissioned officer, who serve on the MFO Force Commander’s staff in the following positions: Section Chief, Force Protection (Lieutenant Colonel); Deputy Force Protection Officer (Major); Senior Investigator (Major); Military Information Officer (Captain/Major); and Investigation Assistant (Non-commissioned Officer). Dutch personnel serve a six-month tour of duty with the MFO.

In January 2015 the Netherlands terminated its troop participation again, it will still continue to support the MFO financially.
​ 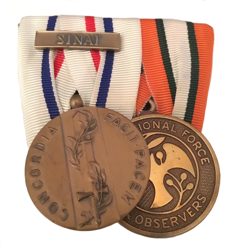